Håkan Broström started out on piano in his small Swedish home-town Motala. At the age of 15, he got hold of a tenor saxophone in order to join a local blues band. Ever since, he has been playing saxophones of all sizes but, early on, made the alto and the soprano his main instruments. He also plays the flute in Big Bands.

While still a teenager, he became a student at the College of Music in Malmö, where one of his teachers was Helge Albin, alto saxophonist, composer and leader of the Tolvan Big Band.

At this time Håkan co-founded the quintet Equinox, which also featured tenor saxophonist Tomas Franck. After settling in Stockholm in 1984, Håkan soon established himself as one of the foremost saxophonists on the scene, fronting his own combos and playing with the groups of trombonist Eje Thelin, trumpeter Gustavo Bergalli, guitarist Ulf Wakenius, and others.

He was also a member of the Swedish Radio Jazz Group, the Stockholm Jazz Orchestra,Tolvan Big Band, Mikael Råberg Big Band and other big bands, and he played blues and reggae music with singer Peps Persson.

For many years Håkan led the own group "In and Out" in which musicians as Esbjörn Svensson,Bobo Stenson,Palle Danielsson,Jacob Carlzon among others has played in.

In 1993 Håkan joined the ranks of the Norrbotten Big Band.. Besides leading the saxophone section on alto and soprano, he is a heavily featured soloist and he also contributes with arrangements and composition.

You can also hear Håkan Broström in his own New places orchestra, Which has collaborated with artists as Viktoria Tolstoy, Rigmor Gustafsson, Fredrika Stahl., Tommy Körberg, Meja, Jennifer Brown, Movits among others.....

Håkan Broström is one of Sweden’s top names in jazz. He has played with some of the biggest names on the scene.Via the Norbotten Big Band, Swedish Radio Jazz Orchestra and the band Sixtus, he has played with such legends as Herbie Hancock,McCoy Tyner, Dave Liebman,Kenny Wheeler,Chris Potter, Joe Lovano, Philip Catherine, Toots Thielemans and Putte Wickman .Håkan Broström has toured and played as aband leader and sideman with among others Tim Hagans, Bobo Stenson, Adam Nussbaum, Palle Danielsson, Esbjörn Svensson, Ulf Wakenius and Jeff "Tain" Watts. 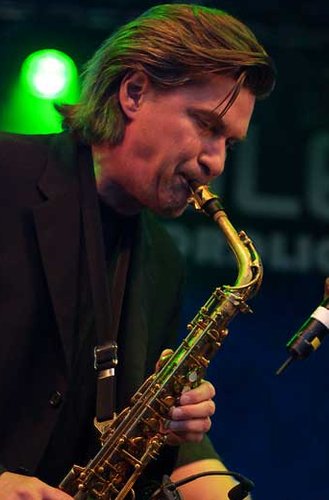